Alice responded to an ad for a group shoot. And after this group photo shoot I reached out to her and asked her for a solo shoot. Her preference was to pose in the sea surf, hoewever we found out that most of the beaches in the Netherlands are filled with people. So finally we decided on a location near the sea and behind some dunes. Alice proposed to accompany the resulting photo with an interesting and mysterious text fragment: "Down, down, down. Would the fall never come t 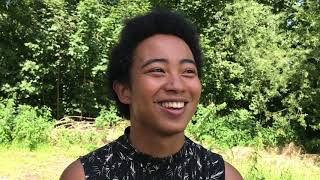 Talented Daphne joined my during the group photo shoot, and interviewed some participants. I think she was able to catch the essence of the photo shoot in these short interviews, thank you Daphne! And thank you models, beautifully phrased.

More cold: Sophie modelled in the forest on another cold day

Emergency landing with no control